The use of hyperbaric oxygen therapy for concussion has been shown to reduce many symptoms caused by inflammation, brain tissue and blood vessel damage, as well as slowed brain nerve function. These symptoms include headaches, memory loss, light sensitivity, impaired concentration/focus and much more depending on the severity and individual.

The only reason humans absorb oxygen is because of pressure. When doing HBOT therapy, you are assisted into a comfortable chamber that mimics diving below the sea level (or 1 atmosphere). As you go below sea level, the pressure increases, making the driving force of oxygen into your bloodstream even stronger. Oxygen will be carried by your red blood cells as done under normal pressure, however it will also be dissolved into the plasma of your blood allowing your body to absorb much greater levels of oxygen than you could at the surface.

This additional oxygen can lessen symptoms through reducing inflammation and stimulating nerve and brain healing. It also stimulates the growth of new brain cells from stem cells in the brain. Because the oxygen in the plasma can reach areas in the brain where blood vessels have been damaged, it not only gets vital fuel to those nerves to repair damage, it stimulates the regrowth of new capillary beds to improve blood flow to the damaged brain tissue.

Hyperbaric Oxygen Therapy can be used as a standalone form of therapy or in conjunction with brain rehab. Oxygen along with glucose or ketones is needed as fuel for brain cells. So you can use HBOT to pre-load before neuro-rehab or to help recover and prevent brain fatigue after neuro exercises. This makes HBOT an excellent partner to Occupational Therapy, Functional Neurology, Vestibular therapy, Neuro-optometry, Speech therapy and any other activity that challenges your current brain energy capacity. 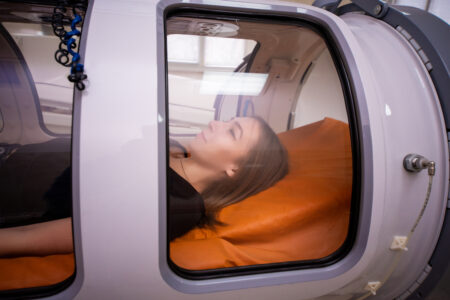